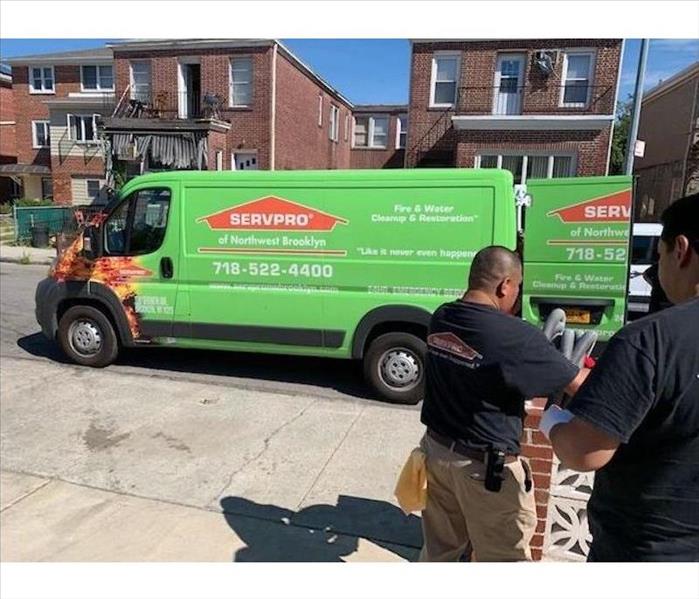 Our SERVPRO technicians are ready at a moment's notice. Give us a call right away if your home has been affected by fire damage.

New York City is arguably the most vibrant city in the world, and Brooklyn can rightfully claim its share of that fame. This famous borough is often portrayed in books, movies and is a must-see in tours of the City. Most may not realize that Brooklyn is in Kings County, the second-most densely populated in the United States of America. It also shares the honor of being named the most populated borough in New York City, sharing a border with Queens and boasting connections to Manhattan via tunnels and bridges. Its name honors Breukelen, a Dutch village. If Brooklyn was its own city, it would follow Los Angeles and Chicago in terms of population. Appropriate to its diversity, the borough’s motto is “Unity makes strength.”

Starting around the turn of the century, Brooklyn has become a preferred place to live, and the area has gentrified considerably. Although this process has brought up affordability concerns, it has also evolved into the home of start-up firms, artists, and entrepreneurs, as well as young families. Brooklyn is used to leading the charge in adapting to its residents’ needs, just as it did in the 1800s when it supported industries springing within its borders by creating services and utilities to meet the growing population.

From an economic perspective, Brooklyn adds considerable value to the financial landscape of New York, but its riches go above and beyond what can be expressed in currency.

No other offering manifests the borough’s cultural wealth than its cuisine. The food culture in Brooklyn reflects the diversity of its population, and both residents and visitors can enjoy everything from Asian to African to Italian. The number of restaurants is astounding and would take a while to visit. However, Brooklyn is most famous for its pizza, hot dogs, cheesecake, and bagels. Unlike other pizzas, Brooklyn-style pizza is thin and crispy, with toppings extending to the pie's edge. Rumor has it that one of the hidden ingredients in the world-famous New York pizza is literally in the area’s water quality. Water is also identified as the key to making the best bagels. Regardless of what the secret is, people from all over crave these specialties.

Getting around in Brooklyn can be challenging due to many people moving around in its streets. Several groups, including Transportation Alternatives, have embarked on improving pedestrian and bike pathways and advocating for better public transportation and reduced vehicle traffic. About a dozen bridges connect Brooklyn to nearby locations, but the Brooklyn Bridge, built in 1883, is perhaps the most notable among tourists and residents. Not only does it offer a practical option to connect with Manhattan, but it also allows one to appreciate the City from a distance. Some landmarks you should expect to see include-

If you have been reading up on Brooklyn, you may have noticed that the arts community is an integral part of it. In DUMBO (an acronym for Down Under the Manhattan Bridge Overpass), many galleries and artist spaces have flourished, and you can find works suitable for all tastes.

Originally a ferry landing, the area’s warehouses, and industrial buildings became ideal for companies such as Etsy and West Elm to set up their headquarters, as well as artist lofts where creativity reigns. On any given day, galleries exhibit pieces by established artists as well as up-and-coming talent. Renovations and new construction have resulted in unique buildings, often commanding top dollar in real estate transactions, but many families have grown along with the City and whose traditions remain rooted in Brooklyn.

Whether you are curious about Brooklyn’s pizza, art, accent, or people, you will not be disappointed. New York City, and this borough, in particular, embody the very vision of the American Dream, and its confluence of cultures is evident block after block. Take a walk, ride a bike, or hop on a tour bus and venture out to explore.

Protecting Your Brooklyn Home in Case of Fire

The risk of a home fire is as prevalent in Brooklyn as it is in other communities. However, the high population density and some buildings' age may make your home more vulnerable to the consequences of smoke and fire, whether in your home or a neighboring unit. At SERVPRO, we pride ourselves on our ability to mobilize quickly and begin the restoration process as soon as we arrive. Our expert team knows the area well and understands the limitations natural to the different neighborhoods' pace and composition, and we work within those parameters.

When you find yourself in need, a call to our 24/7 hotline invites us to bring EPA-approved cleaning solutions, extractors, and specialized equipment to remove the debris left behind by the fire and extinguishing efforts. We also employ the necessary methods to remove the pervasive smell of smoke typical of fires of all sizes, and we explore your insulation and ventilation as an added precaution. Our team is a one-stop guide to the restoration process and the coordination with other relevant parties, including sub-contractors and insurance as needed.

SERVPRO of Northwest Brooklyn is your friendly neighbor when disaster strikes. Call us at (718) 522-4400 and let us minimize disruptions to your daily life. Like you, we want to leave your home, “Like it never even happened.”